More than 55,000 mite species are divided among several hundred families. The Acariformes (or Actinotrichida) make up nearly 43,000 of these species, the Parasitiformes (or Anactinotrichida) over 12,000. Most workers believe that many more taxa remain to be described, and some researchers consider these two major mite groups to be separate, and possibly unrelated, orders.

Acariformes can broadly divided into a Trombidiformes and a Sarcoptiformes group. The trombidiform mites include a wide diversity of lifestyles, and most of them are placed in a Prostigmata group characterised by tracheal openings near the front of the body. The sarcoptiforms are the ‘chewing mites’ with modified mouthparts for eating solid matter. As well as some primitive forms, the majority of the sarcoptiform mites belong to the Oribatida which are a significant component of leaf-litter faunas. The Astigmata probably evolved from within the oribatids and are usually tiny mites which have lost their tracheae and which specialise on using ephemeral food sources.

Parasitiformes include the rare, and probably rather primitive, Opilioacarida. Another rare group, the Holothyrida is possibly related to ticks. The ticks themselves, the Ixodida, are primarily divided into hard and soft ticks; the latter usually found on birds. The remaining parasitiform mites belong to the Mesostigmata (or Gamasida in some terminologies) and include a diverse range of predatory mites, but also groups which live in more intimate or even parasitic relationships with other animals. Some mesostigmatids feed on plant material.

Fossil spiders have not been fully cataloged since Bonnet’s Bibliographia Araneorum and are not included in the current World Spider Catalog. Since Bonnet’s time there has been considerable progress in our understanding of the fossil record of spiders – and other arachnids – and numerous new taxa have been described. For an overview see Dunlop & Penney (2012). Spiders remain the single largest fossil group, but our aim here is to offer a summary list of all fossil Chelicerata in their current systematic position; as a first step towards the eventual goal of combining fossil and Recent data within a single arachnological resource. 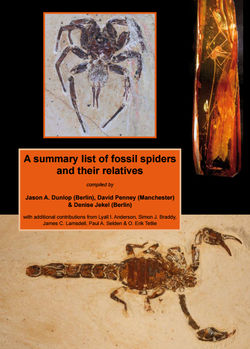