The body of a solifuge is divided into two regions: the cephalothorax, or prosoma, and the abdomen, or opisthosoma. The appendages are attached to the prosoma. The dorsal plate of the cephalothorax is divided into three sclerites: the propeltidium, the mesopeltidium, and the metapeltidium. The abdomen is segmented. The two eyes of solifuges are centrally located on the dorsum of the propeltidium. Projecting forward from the cephalothorax are the enormous, hinged chelicerae. The upper segment of the chelicera is called the fixed finger and the lower part is the movable finger. The tooth patterns of the fixed and movable fingers of the chelicerae are used for species diagnosis.

The pedipalps are typically held forward of the animal as it moves through the environment.

The pedipalps are covered in sensory setae and, as with other orders of arachnids, are likely used for sensory perception since solifuge eyesight is thought to be poor. As with so many aspects of solifuge natural history, the function of most of the pedipalpal setae is unknown. At the tips of the pedipalps are cuticular lips that, when open, expose an eversible suctorial organ. This organ is used for climbing up smooth surfaces and to facilitate prey capture.

Feeding, as with most arachnids, is via external digestion. A sieve-like rostrum inside the opening to their mouths filters out particulate material. The alimentary system consists of the foregut, midgut, and hindgut. Lateral branches of the hindgut serve a function similar to Malpighian tubules.

Breathing is by means of an extensive tracheal system that opens to the outside via prosomal and opisthosomal spiracles. The tracheal system resembles that of insects and their high metabolic rate is more similar to that of highly active insects than of more typically sedentary arachnids. The solifuge heart is located dorsally in the abdomen.

As with other arachnids, the brain consists of a supra- and subesophageal ganglia. Only a few sensory organ systems have been studied in any detail. One such sensory organ unique to solifuges is the malleoli, also called racquet organs. These fan-like processes extend below the ventral surface of the last pair of legs and function similarly to the pectines of scorpions to pick up chemical cues from the environment. 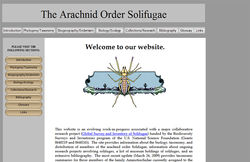