The current World Spider Catalog is the first fully searchable online database covering spider taxonomy. It considers all taxonomically useful published work. Unpublished statements – even if correct – will not be taken over here. Also contents of websites that are not published elsewhere are not considered. Basically, it includes all descriptions of new species, transfers, synonymies and all taxonomically useful (i.e., illustrated) references to previously described taxa. Electronic supplements can be considered in combination with the corresponding main article. Not included are fossils (but see the separate fossil section), subfamilial or subgeneric divisions and allocations, or mentions of taxa in purely faunistic works (unless accompanied by useful illustrations).

The catalog entries for literature prior to 1940 do not reflect a complete re-check of the classical literature. Roewer's listings based on the classical literature have largely been accepted, and only discrepancies detected between Roewer's and Bonnet's treatments have been re-checked and resolved. These listings are not intended to supplant either Roewer's or Bonnet's volumes, but rather to provide a quick, electronically searchable guide to the most important literature on spider systematics, worldwide. Investigators doing original research should still check the listings in Roewer and Bonnet; we hope that omissions are few, but no project of this magnitude could ever be error-free.

In certain cases, published nomenclatural or taxonomical changes will not be taken over by the catalog. This includes for example cases with violations of the provisions of the International Code of Zoological Nomenclature. In debateable cases (e.g. purely typological genus-splitting without phylogenetic reasons), an expert board will decide the case democratically. However, if some published alterations are not taken over by the catalog, the respective information and reference is given anyway.

The following abbreviations are used: Male or female signs (m or f) alone indicate that palpal or epigynal illustrations are included (hence figure references without such annotations include only somatic characters, generally through scanning electron micrographs; citations are not provided for cases where authors supplied only a general view of the body). The letter D indicates an original description, either of a taxon or of a previously unknown sex. The letter T indicates that one or both sexes have been transferred from a specified genus to the one under consideration; tentative statements indicating that a species "possibly belongs" or "may belong" elsewhere are not included as transfers (or synonymies). The letter S indicates that details of one or more new synonymies can be found immediately under the generic listing; an S followed by a male or female sign indicates that a previously unknown sex has been added through a synonymy. The type species of each genus is marked with an asterisk (*).

The organization of the entries is hierarchically determined; hence synonymies at the generic level are indicated under the family (and cross-referenced under the appropriate generic) listings, but affected species are listed separately only if there are significant references to them in particular. Similarly, synonymies at the species level are listed under generic, rather than familial, headings. The brief descriptions of geographic ranges are provided only as a general guide; no attempt has been made to ensure that they are comprehensive.

Users who detect errors, of any sort, are urged to bring them to our attention (email to wsc(at)nmbe.ch). 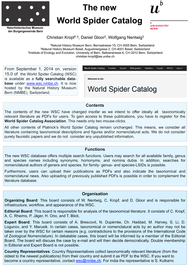 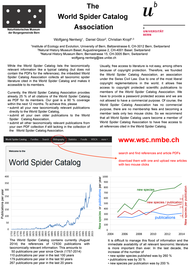